Texturing for printing and decorations

In this section, the results laser engraving and texturing of copper and chromium sleeves are presented. As laser source, the Ekspla Atlantic 60 picosecond laser (60W, 13 ps, 1 MHz) was used. Next Scan Technology polygon scanner LSE was used as a fast scanning system. The key to Next Scan Technology is its proprietary F-Ω™ strip-mirror optics, combining the telecentricity of F-Theta optics (focal length of 190 mm) with a scan width of 170 mm and proprietary controls SuperSync™ for laser synchronisation. The polygon scanner provides scan speed between 25 to 100 m/s.

The laser processed areas have a high quality, and no very limited post processing of the structured surface are required to fulfil the required quality demands of the most printing and moulding applications. By using specific laser-scanner processing parameter, the generation of self-organized structures can be achieved. The size of these structures can be compared with the length of the used laser light with 1064 nm causing the visual rainbow effect of the laser textured areas. By adjusting the polarisation direction of the laser beam the orientation of the structure can be changed which gives great freedom to generate a variety of visual and functional effects. 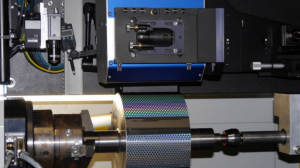 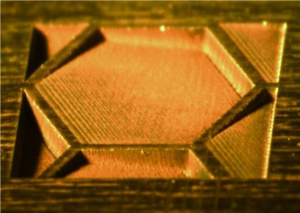 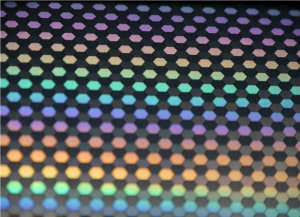 The control software was adapted, tha thigh power laser fs laser system (900 fs, 80 W) from Lumentum (with the standard LSE-170 line scanner from Next Scan Technologies and a rotatory axis  would operate fully synchronised to each other. The specified position accuracy of the LSE-170 line scanner of ±5 µm and the repeatability of <3µm could be confirmed. The accuracy is also kept if the machine is stopped between to marking processes.

Combination of a synchronized  with linear axes to extend the working area
A new measuring device to determine the differences between the coordinate system of the galvoscanner and the axes system was developed and tested. It allows a position accuracy of about 10% of the spot size and the correction of the length and angle errors between the two coordinate systems. With this set-up, four different stitching strategies and its influence intersection between two working fields were investigated. It finally depends on the shape/surface of the 3D-structure if the intersection region can be observed or not. Even in the case when it can be observed it was not possible to measure any height difference in the intersection region. To avoid this effect, the position and shape of the intersection line have to be aligned with the image whenever this is possible.

We have established the manufacturing chain to realise large area micro/nanopatterned films with tailored surface properties. In particular, hierarchical features have been realised by ultrashort pulse laser sources with high power in combination with fast scanning technologies. Direct engraving of tailored three-dimensional features into a nickel cylindrical drum/mould have been exploited and transferred in a continuous mode into a commercial UV curable resist material. The Nickel drum mould was in the form of a sleeve (no-discontinuities) and has been treated and engraved with high precision within a machining tool capable of processing multiple laser machining wavelength while state of the art beam splitting and accurate scanning tools were used to avoid discontinuous boundary issues and low thermal impact.
With the aim to obtain super-hydrophobic surfaces particular designs and structures ranging from sub-1 μm up to 100 μm were examined. Partner Nanotypos performed a roll to roll ultraviolet light assisted nanoimprint lithography (R2R UV-NIL) to replicate at the high rate our textured nickel surfaces produced at IOM. Throughout our experiments emphasis was given to generate 3D topographies which tend to have the best performance according to our theoretical calculations. All processing parameters were optimised to have a robust replication technology starting from the laser processing values up to the final R2R embossing step. Based on our experiments hierarchical topographies which combine two level features, resulted in having the best water repelling values hence water contact angle values of 158 deg.