For the present assessment case of laser scribing of thin-film solar cells on a flexible substrate, this involves that the optical scribing unit should work reliably without the need for human intervention during the experimental period. Scribing process parameters determined during preliminary experiments were not re-adjusted at least within one production batch. Production of thin-film samples should be done on a production line or at least a pilot line. Scribing must be done at industrially relevant throughput. Performance of the scribing processes developed in APPOLO was directly compared to industrial reference samples produced using existing production processes. Sample characterisation has been done according to quality measurement standards of the end-user. 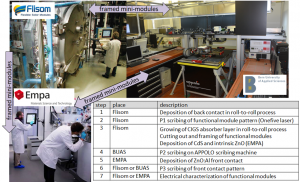 Production of samples for APPOLO assessment experiments was integrated into regular batch production on Flisom’s pilot line. In order to work as closely as possible to the production conditions and to guarantee the validity of the experimental results, reference batch production runs were selected for APPOLO experiments. The typical roll was several hundred meters long and 600 mm wide. Every five to ten meters of the roll, Flisom inserted a quality assessment section where different electrical, photoelectrical, and geometrical characteristics of the thin-film stacks are measured and evaluated. Three production runs were selected for APPOLO assessment, with samples which passed Flisom’s first level quality assessment and intra-roll variation was within acceptable limits for production. From these three rolls, a total of 24 samples (8 per roll) were processed using APPOLO parameters for the testing variability of results.Electrical characterisation of 24 samples from three different production batches (rolls) has shown the low variability of results. 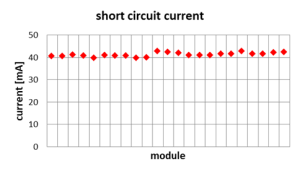 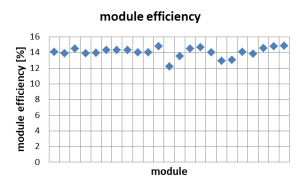 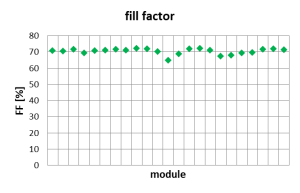 Scribing performance of the system with polygon scanner

In the frames of the APPOLO project, different scribing approaches were investigated for CIGS module structuring. The P3 “type 1” regime involved direct laser ablation of the TCO and absorber material to expose the molybdenum back-contact. In this case, high pulse overlap regime is required. Therefore, there is a large chance of heat accumulation during the scribing. However, these issues are less critical in the case of P2 scribing (interconnect formation). For this, the P3 process parameters can be easily adapted for the P2 scribing. The P3 “type 2” involved removal of the front-contact only. That is a low pulse overlap regime, and laser-induced thermal effects can be reduced. 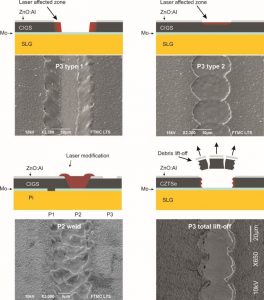 After process validation procedures we conclude, that the P3 “type 2” scribing process (TCO lift-off) is the only available solution in the case of CIGS cell separation purposes. The green (532 nm wavelength) picosecond laser is optimal for such task. P3 “type 2” is a fast process, and low power picosecond lasers (<1 W@100 kHz) can fully meet process throughput requirements for a 1 m wide CIGS deposition line. Such laser parameters also apply in the case of the P1 process. In the case of the P2 process, higher power picosecond laser is needed, since a high pulse overlap is needed to remove the CIGS layer entirely. In this case, the laser should operate at power >6.5 W@1000 kHz at 1064 nm wavelength. Overall, with three separate scribing machine approach for each P1, P2 and P3 scribe, the laser process can add an additional cost of 3.413 €/module or 0.031 €/Wp with a total investment about 1.1 M€ for 15 MW/year line capacity.

Laser-scribing of P2 for Perovskite PV for optimal interconnection fabrication

The activities of WP3 were restructured due to the extension of the work to laser scribing of perovskite films as a new exciting absorber material for thin film photovoltaics. The workplan was reorganized, and a new end-user (FLISOM) was incorporated. The main work done is based on one future vision related to the activities of the end-user, which is currently focused on the fabrication of flexible thin film CIGS solar modules, to combine CIGS and perovskite solar technology for R2R tandem module fabrication. This approach can significantly increase the efficiency of solar modules, which is the fundamental parameter in being competitive with silicon PV at least for applications that require flexible solar modules. One crucial part of the work concentrated on the optimization of the thin film stack for perovskite solar cells including the development of the suited fabrication technologies of the particular films for a semi-transparent solar cell design. Therefore, the usually used gold back contact was replaced by a TCO layer to achieve the transparency of the solar cell up to the band gap of the absorber. In particular, the deposition techniques were adapted to avoid damage to the absorber within the TCO deposition process. Furthermore, additional materials suitable for a transparent conductive layer were chosen and optimized. The laser-based scribing process of the perovskite film was studied in more detail to gain the understanding of the laser-photon perovskite-film interaction process in relation to the best characteristics of the laser scribing for the integrated interconnection process of modules fabrication. Two ablation mechanisms have been observed in general: the standard laser ablation due to fast evaporation/decomposition of the material and a lift-off process due to laser-driven interface phenomena. Both processes were observed for the studied laser irradiation directions – film and substrate side irradiation – and for the examined laser sources. Low laser threshold fluences for patterning were found for photon energies above the band gap or ultrashort laser pulses. For those laser processing conditions, a selective scribing can be achieved without damaging the substrate including deposited films (TCO).

For the module fabrication process, the TCO patterning was also studied. The scribing of the TCO film on the glass substrate with ps- laser has been optimised and transferred to plastic substrates. Both UV and well as IR ps laser pulses can be considered for scribing of the TCO at the substrate. The patterning of the improved TCO films deposited on the perovskite film for the semi-transparent solar cell configuration was managed by using UV-ps laser pulses taking into account that the TCO film has a much higher threshold for scribing than the perovskite film.

The laser-induced forward transfer (LIFT) process is a technique to transfer locally different materials and in different sizes onto a number of different substrates. The laser beam is focused in the donor substrate/ribbon interface. During the pulse duration, the laser energy is deposited within the laser spot size into the interface, evaporating a little amount of the material and generating the expansion of the remaining material, accelerating the non-evaporated part of the metal film towards the acceptor substrate.

Principle of LIFT process for metallisation of thin-film solar cells

Main objective was to design and develop reliable schemes for direct writing of flex electronics and photovoltaics in planar geometry using laser sources. It has been proved that laser curing and sintering of silver paste lines printed using LIFT can be achieved at different laser powers and scanning speeds, but there is a small parametric window for obtaining the desired properties (increased electrical conductivity and good mechanical adhesion), making it a very sensitive process. It has been proved that the selective laser curing and sintering can be combined with other laser direct writing printing techniques and be implemented in future photovoltaic industrial applications for developing an all-laser based metallization process. And it has been shown that can be used as a low temperature process due to its capability to produce local heat suitable for the process but leaving the rest of the cell almost at room temperature. As a proof of concept, the full metallization of a CIGS solar cell on steel flex substrate with fingers and busses deposited by the proposed LIFT technology has been performed and a working solar cell has been obtained. The method used for LIFT printing of silver lines has overcome one of its main problems for industrialization, as is the printing of long lines. As a result of the work done Mondragon Assembly has developed a flexible industrial machine tool for adhesives/pastes dispensing, as well as for curing/sintering processes. 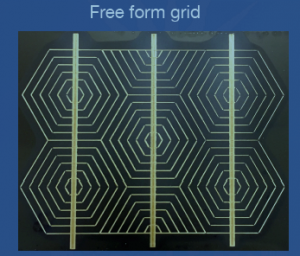 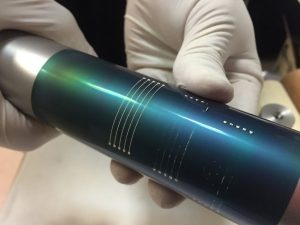 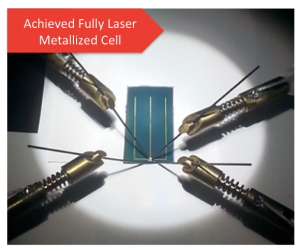